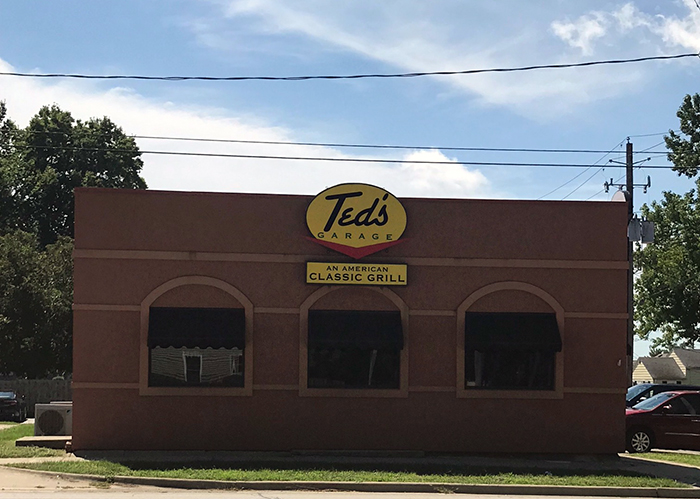 At First National Bank and Trust Company we believe that a community is only as strong as its local businesses. This is why we have made it one of our top priorities to spotlight local businesses in the Clinton area as part of our Eat, Shop, Bank Local blog series. For this blog we have featured owner Delfino Naxi and his two restaurants, Ted’s Garage and Cinco de Mayo restaurants.

Delfino Naxi has been with Ted’s Garage since the beginning. Today he owns the place.

The Mexico native was there as Ted’s opened on Van Buren Street in Clinton in November of 2004. He was set to take over as owner on April 1, 2013, when a March 31 fire destroyed the building.

But Naxi persevered, eventually reopening Ted’s in October of that year at its current location, 602 S. Center St.

The popular Clinton hangout offers a variety of American classics, including burgers, steaks and more.

Naxi moved to the U.S. in the early 1990s after growing up in the city of Puebla in east-central Mexico. He worked 18 years in the food industry before joining Ted’s, working at Texas Roadhouse, Tuscany Steak and Pasta House and Three Stars.

Naxi opened a second Clinton restaurant, Mexican eatery Cinco de Mayo, in November of 2017. Between the two restaurants he employs about 45 people. While Naxi is the sole owner of the businesses, his family works and helps out at both, especially Cinco de Mayo, he said.

“I grew up in a culture of people helping each other and my family still believes in that,” he said. “

Naxi said he’s happy to be in Clinton.

“The community. It feels like we are serving our own family every day. Mostly local clients, but we do pull in from surrounding communities and travelers,” he said. “We have great people that support us and this town. That support is very important for me.”

Naxi said he’s enjoyed working with First National Bank and Trust Company during his time in Clinton. He remembers meeting bank President Josh Shofner and sparking a conversation that led to a partnership.

“Community is very important to me and when Josh came to me as a patron of the restaurant and I learned that he was the president of a bank that had the same community commitment as I did, we wanted to do business together,” Naxi said. “The process of getting financing with Josh was very smooth. The bank plays a big role in our success.”